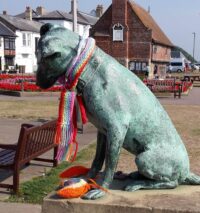 A Walk with Snooks

A family trail around Old Aldeburgh

Aldeburgh Museum has compiled a short walking trail suitable for families and for young and old around Old Aldeburgh.  The walk features Aldeburgh’s all-time favourite dog, Snooks, who takes you on an engaging and child-friendly walk around various landmarks in the town.   Discover what is buried under the North Lookout, look for ships from the Town Steps and investigate the secret Smuggler’s Passage.

A Walk with Snooks takes about 1 hour and is FREE and available from the museum shop during museum opening times. Normal admission applies.

Snooks was a dog owned by Nora and Robin Acheson who were both doctors in Aldeburgh,with Robin caring for the community between 1931 and 1959.  He would often attend house visits around Aldeburgh and was a common site trotting down Aldeburgh High Street.  The origin of his name, Snooks, is from the tinned snook (fish) which the family ate during the war.

The Snooks statue was unveiled in 1961 to commemorate Dr Robin Acheson’s life and work in Aldeburgh.  His wife, Nora, was added to the plinth in 1981.

Having spent many years sitting quietly by the Aldeburgh boat pond, tragedy struck in February 2003 when Snooks was stolen from his site and completely disappeared.  The town were so outraged, that a fundraising effort began and Snooks was replaced by an exact replica.

Almost ten years after the theft of Snooks, the original was returned home by antiques dealer, John O’Connor who found the lost statue at a fair in Lincoln.  He found the name of the dog on the collar of the statue and investigating further, realised that he had been stolen and returned him back to Aldeburgh.

As the replica Snooks takes pride of place at the boating pond,  the original snooks statue was given to Aldeburgh  Hospital in July 2013 where he now sits in the garden – and is enjoyed by both visitors and residents of the hospital and the local community.

. Aldeburgh Museum is pleased to announce the publication of a new booklet of four…

Come and meet our Museum Mice.

The Museum was part of the Christmas festivities in the Town.
Copyright © 2022 Aldeburgh Museum . All Rights Reserved. Registered Charity No. 1166357 | Website design by Heritage Interactive
Back To Top
×

Do I have to wear a face covering?

Can I go into the museum if I just turn up?

Yes please do. We no longer have a pre booking system in place. An admission ticket will be issued on entry.

How do I get a ticket for entry?

Please just turn up and purchase an admission ticket on arrival.

When will you be open?

In November, December, January we will be open at weekends, with extended times over the Christmas holidays. We will be open from December 27th to 31st, so every day from the 27th to January 2nd 2022.

How accessible is the museum?

The museum has worked hard to ensure that everyone is welcome and is able to access the displays and enjoy themselves when they visit us.

Access for visitors with physical disabilities
The Moot Hall is a grade one listed building and the exhibits are on two floors, with the main entrance on the first floor and the exit on the ground floor. For those with limited mobility who cannot climb the stairs, there is access through the ground floor, where you can look around the museum room and its exhibits. Tablet computers will provide support for those unable to climb the stairs (coming soon). Our front of staff are ready to assist when you arrive.

We are sorry but the museum is not wheelchair accessible but it is possible that access could be possible for small wheelchairs through the ground floor. Please let us know your requirements.

Access for visitors with visual impairments include:
Tablet support (coming soon) and a handling collection and items to touch. Access dogs are welcome.

Access for visitors who have a learning disability, dementia or are on the autistic spectrum includes:
An experienced member of staff.  In due course we expect to have SEN backpacks and a sensory map.

If you have any additional needs please let us know and we will do our best to accommodate you.

What is there for children?

Whether you have tiny tots or teenagers, there’s plenty to do with the family. There is dressing up as a mini mayor, games and challenges, trails and more.

Whether that’s seeing our exhibitions or taking part in one our workshops, we want you to feel at home here.

Note: because of the Covid-19 pandemic some of these activities for children are suspended.

What is included in my admission ticket?

Your admission ticket includes entry to all our temporary exhibitions and permanent collection displays. You may also borrow a tablet computer to learn more about our exhibits (coming soon). Your ticket enables you to visit multiple times over a one year period though does not cover special events.